Resorts Have Their Own Special Take on Closing Activities

A Round up of Pond Skimming Events

Sadly the ski and snowboarding season is coming to an end! However, we in Colorado like to go out with a bang! Here is what you need to know about the pond skimming events that we can bring you to!

Starting with Keystone’s Slush Cup on Sunday, April 9 at the Mountain House Base Area. This is the most family friendly of the bunch. The day begins at 11 am and in addition to the adult Slush Cup, there is also a Kidtopia event with kids as young as six competing to skim across the water! With live music from the Beloved Invaders. Same day, different county holds Aspen’s 9th Annual Schneetag at the Merry Go Round restaurant starting at 12 in the afternoon. The Schneetag diverts from the traditional skimming the most by inviting teams of four to create a craft that they will pilot down slope to attempt to float across a 20x40 foot pond.

The following Saturday, April 15, Copper Mountain is hosting the 6th Annual Red Bull SlopeSoakers. This unique event combines a slopestyle rail jam with the pond skim and will be run in jam format. Multiple prizes will be awarded including Best Crash! Over the pass the next day on Sunday April 16, Vail will hosting the 15th Annual World Pond Skimming Championships at Golden Peak beginning at 3 pm. The most traditional take of the bunch in getting across the pond but is known to have some of the most entertaining costumes! Rounding out the pack is The Breck Plunge on Sunday, April 23. A new event to Breckenridge more information will be released soon about it but expect it to not disappoint as Breckenridge is known for big fun!

Remember, CME runs 365 days a year. Because the skiing is ending doesn’t mean that shuttles stop running. Look at our current Specials for the best deals, including the 10 Ride Pass! 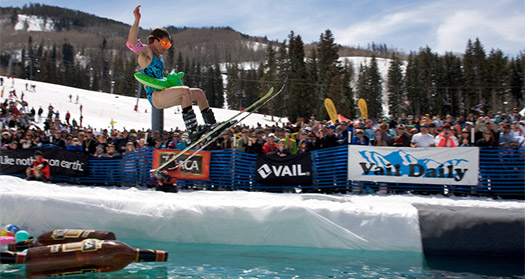